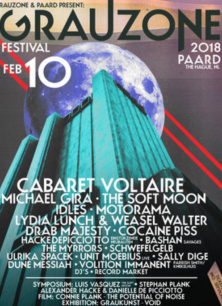 Grauzone festival is an independent multidisciplinary underground festival with a diverse and cutting-edge program where music, film and art complement each other. Grauzone festival features young talent as well as established names rooted in or influenced by the underground music scene of the eighties. The program consists of performances by (international) bands and DJ’s, a symposium with lectures and interviews, an exhibition and a film program.

The 5th edition of multidisciplinary festival Grauzone will take place saturday 10th of february 2018. After this year's successful edition it will again take place at the Paard Van Troje in The Hague.